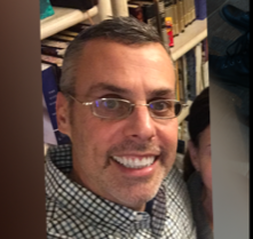 Staff Biographies:
​Rabbi Joel Hoffman
Joel has been the director of Birthright Judaism since its inception in 2000. Similar to rabbis throughout most of history, Joel has a regular "day job" while teaching and writing about Judaism in his free-time.  Joel worked in the non-profit sector for ten years, and is currently in his twelfth year working as a special education teacher.
​
Over the years Joel has given 100s of lectures on Jewish topics—all for free--in 12 different states. He particularly enjoys introducing Jews to the richness of the Talmud and to how Hasidic teachings can spiritually enhance one's life.


A couple of teaching highlights include being the scholar-in-residence for an all-day retreat of the Los Angeles Board of Rabbis, and speaking at an Evangelical gathering about Israel advocacy with 700+ people in attendance. Joel has also published over 30 d'vrei Torah, online essays, journal articles, and opinion-editorials. (see Writings.)

Joel's general education includes a B.A. from the University of Illinois--where he played on the ice hockey team (ACHA Div. 1)--a master's degree in education from Gratz College, a Massachusetts Teacher's License in special education and middle school math/science, and a Principal’s License.


Joel lives in the Boston area, his oldest of three children is a freshman in college, and he enjoys hiking, mountain biking, working out, and rooting for the New England Patriots.


There Are No Other Staff Members at this Time.
​
Powered by